Osprey Island lies at the southeast corner of Buck Lake. Its distinguishing features are the tall white pines which tower over the surrounding vegetation, notwithstanding that one of them had its top broken off by winds during a severe winter ice storm. 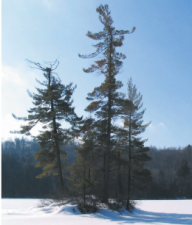 For a number of years, the pine with its flattened top has provided a sturdy platform for a pair of osprey to build their large nest and breed successfully. The pair of osprey nesting on Buck Lake have body lengths of nearly two feet and extended wing spans of more than five feet.
In many respects, the island location is ideal as it is inaccessible for raccoons and other land based predators. It also provides a clear view of the surrounding terrain to protect against crows, owls or gulls approaching the osprey nest to steal their eggs or young if left unattended.

The island location also provides easy access to three nearby lakes with plentiful stocks of fish, the principal, and in some cases only source of food for osprey. Hikers on the Buck Lake trail are requested to pass by the island quietly to avoid disturbing the osprey family during the incubation period and the early weeks after the chicks have hatched.

If disturbed or threatened in any way, osprey will express their displeasure with shrill whistling cries which can carry for long distances.

Like other raptors who feed high up the food chain, osprey experienced serious breeding problems in many parts of North America starting in the early 1950s, due to the increased concentrations of poisons ingested through the food they ate. This was caused by the widespread use of pesticides in their winter range, which led to the thinning and breaking of the shells of their eggs. The long life span of osprey of up to thirty years fortunately enabled them to survive the heavy pollution despite their inability to breed during this period. Since osprey usually mate for life, twenty years later with a healthier winter food supply, they have again started to reproduce.
Because of their feeding habits, environmentalists view the presence of osprey and other large birds of prey as accurate reflections of the health of local lakes and surrounding areas.